New technologies are changing the way we live, work, play, communicate, and learn. Keeping up with these changes and adapting to the evolving needs of today’s organizations is challenging. In the curent article we aim to analyze new possibilities for reaching learners and deliver content, while we also provide information on an e-learning platform based on educational strategies and special techniques for teaching at distance.

The Idea of the Platform

Creating an e-learning platform dedicated to English language learning to immerse learners in Anglophone language and culture was desired. The English Attack! founders envisaged a platform to be used by each student, as a complement to other forms of training, but the same time to be also adopted as a training resource by schools, universities, language training centers and companies. Today it is already used both in class and as homework platform by many teachers and students in over 30 countries worldwide and it is based on the following pedagogical principles:

Competence is determined by regular exposure to authentic spoken English. The frequent exposure is enough to motivate students to use the service regularly through pleasant content units based on topics of general interest. For instance, a local movie running in theaters, or providing visual dictionary vocabulary on a major news event.

Learning effectiveness is enhanced by lessons that are always situated in a specific context, have a short duration and are illustrated by a video or a selection of photos.

Storing newly acquired language in long-term memory can only be achieved by repeating the content learned enough at apropriate intervals. This is achieved by encouraging repetition of the learned items through series of learning games that are stimulated by video and photo content to the site.

Errors should not be penalized but seen as an attempt to solve the task, as in video games, when they are perceived as a natural consequence. This principle is reinforced by a reward ecosystem consisting of positive feedback achieved through the points obtained for each activity and the badges awarded for specific learning tasks.

Practicing communication skills is most encouraged by interactions with the others. This is achieved by active participation (and communication) of students from the English Attack’s social network of users who are learning English.

How we did it

Initially, Entertainment Learning company looked for a new, more flexible platform to better fit its business model. They prefered an outsourcing company to create a new site that reflects the pedagogical approach to language learning based on cognitive neuroscience and have access to development results from initial stages. Entertainment Learning chose ASSIST Software Romania.

As part of an extensive search for a new platform for its website, Entertaiment Learning wanted a cost-effective, enterprise-level system that wasn’t going to require a lot of upkeep. Using the requirements and design as a starting point, the development team built an architecture that provides consistency and flexibility. The team chose Drupal for its modular structure, considering the platform was desired to have multiple modules like: e-learning module, games, B2B module, the latter being a component for organizations who can manage their users on English Attack! see their learning progress and centralize access to the platform. It was also wanted a coaching module which is a progress-tracking tool that allow learners to measure their absorption of individual learning units while following coaching tips.

And through the use of open source software, they were able to integrate content efficiently, while providing access to access to over 1,000 video exercises, over 5,000 multimedia vocabulary items and thousands of practice game combinations to learners all over the world.

Because new features on test environment were to be seen at work before they are on production, all the development took place on a testing environment which is almost identical with live environment. This is the way the software team developed several features. At the time being they are currently developing new features comparable to MongoDB and Nodejs.

As mentioned before, the same team is still working on the platform, which is a critical factor when outsourcing development due to the fact that clients prefer working with the same team to have continuity.

Traffic to the site increases as English learners sign in from all over the world, so the platform needed to adjust to those changes rapidly. It also needed to be able to onboard additional modules without the hassle of having to provision new servers.

Eliminating a difficult time duplicating content for use in 23 languages worldwide, Drupal templates allowed the development team to quickly define and streamline its workflow process. This enabled the team to deploy content across borders rapidly, an ability that is paramount in fueling the platform’s international dissemination.

Performance. Considering that most users are logged users was a challenge to scale the platform. To achieve this, automatic deployment software like Salt was used which can configure automatic a server in a matter of minutes. 4 Tier architecture was used to scale horizontally. This is composed from a Load Balancer, Web applications, Storage and Databases. In case of any failure another server with same configuration and data is activated to handle the traffic.

Another challenge was the newsletter feature be implemented for the platform. Customizations and personalizations of the newsletters were needed so an external service could not be used. The challenge was that the system has to send large numbers of emails in a short time and preferred in inbox. To accomplish this, a Python backend was developed to send the emails with Amazon SES. All the sending is done asynchronous and is capable to fulfill Amazon SES limits.

At this very moment the service is capable of sending 250k emails in under one hour while the size limits can be increases without any problem. This performance was possible by using asynchronous API from Amazon.

Mobile optimizations is another challenging task considering the large number of mobile devices in the market. HTML5 has been used intensively but on some browsers it is not fully supported yet. To overcome this, support was provided for old browsers with few users and workarounds were also added for the old browsers. Right now the website and games should work on a large majority of devices (phones, tablets with Android or iOS). Most popular devices were used in-house in order to provide reliable tests.

For internal management the development team used Scrum, an Agile software development framework. This made the development very flexible and easy to adapt to changing features. The client has a good visibility on the development and control over the features. All the code is under revision control for the managers to follow and review the changes.

Entertaiment Learning in partnership with ASSIST Software was able to have an English learning platform in less than six months. The clients now have a flexible multi-language platform that offers a content management workflow that best aligns with delivering an engaging learning experience, and is in line with English Attack’s pedagogical approach to language learning based on cognitive neuroscience.

Because English Attack! is embarking on global expansion and entering new markets, a product launch was traditionally a huge challenge. Thanks to the development team, English Attack! can now generate content and provide it to English learners against individualized weekly learning objectives. As a result there are over 250k users of the English Attack! platform and the number is rising. 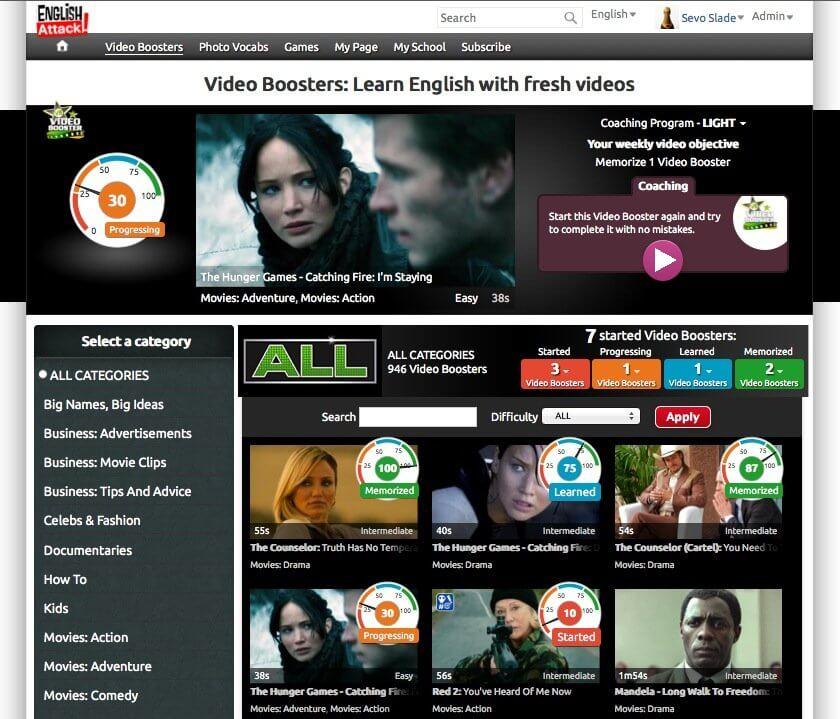