Tips to become the best player of Hooman Invaders | ASSIST Software Romania get in touch
https://assist-software.net/blog/tips-become-best-player-hooman-invaders

Dear readers, I hope that I find you well. I wish to present to you an interesting subject that is not only meant for teenagers, but for all the people that wish to have fun in their free time, while also improving their strategic thinking by playing Hooman Invaders.
Towards the end of the article I will share with you a strategy that helped me get first place in this game. This strategy allows you to get an idea about how to position your towers and also about how to use them in combination with the spells that the game gives you.
This game is available on both Android and IOS and is completely free. From my point of view, it is the most complex Tower Defense game that I have played, with a unique graphical thematic and a very well built gameplay.

The main story of the game focuses around the confrontation between good and evil (orcs and humans), presenting a change in the roles that we’ve gotten used to by listening to stories as children. According to the story of the game, the evil characters wish to destroy the orc village. The orcs, however, discovered that they can defend themselves by building different types of towers outside of the village in order to destroy the enemy before it can reach their settlement.
The game allows the player to build 4 types of towers that can each be upgraded in exchange for a sum of money. Upgrading towers gives the player access to a series of functionalities that permit a large variety of strategic solutions to each level.
One of the aspects that I found pleasing about the game was that it comes with a couple of ideas which create a more realistic and interesting gameplay in comparison with other games of its genre.
For example, the developers implemented in the game the requirement of ammunition in order for the towers to fire at the enemy waves. The players’ ammunition reserve refills after a predetermined period of time, and the towers need to be provided with them as to be able to fire.
Another interesting concept is that the player is given the possibility to choose the priority of attack: the towers can be set to attack the enemies with the most health, the ones with the least health, or the ones that first get in their firing range.
Because of the ability to choose how the towers are placed, which enemy to prioritize on firing, and the necessity to find which combination of tower types to use in order to optimize the munition usage, this game became a most complex and beautiful one.
It is also worth mentioning the fact that the parameters of the towers can be improved by using the medallions which the player can win while playing the campaign, and that there exist a number of spells that he can use in critical situations.

The Campaign is the game mode through which the player is slowly introduced to the defense mechanisms of the game, and it contains 15 levels.
Every victory is rewarded with a number of medallions that vary depending on the difficulty chosen. With the medallions that are obtained, the player can upgrade his spells, but also improve the abilities of the towers with the help of the Passive Skill Tree.
For me, the Arena mode is and has been the place in which I never get bored. This game mode is a little different through the fact that the rules used here are completely different from what the player is used to by playing the other two modes. This permits the creation of missions which are interesting and challenging at the same time.
And finally, I want to talk about Horde Mode. This mode permits you to test your strategies by competing against all of the other players of the game. It’s main objective is for the player to survive as much as he can in front of the enemy waves, that become stronger and more numerous as time passes.

4. Tips to become the best player of Hooman Invaders

The strategy that I used in order to become the best player in this game is a little complicated, and it involves a high risk – high reward type of playing. Thus, it requires you to be vigilant while playing, especially during the first waves of the missions.
During the first attacks, I build a single tower which fires arrows and is situated very close to the village. This way, I can gather as much munition as I possibly can. When I gather 300 coins, I upgrade my munition factory. Afterwards, I build my towers in the order that can be observed in image 1.0:
In the beginning I don’t upgrade any of them. As I get enough money, I slowly but steadily get them to a maximum level. Worth mentioning is the fact that I set the towers which fire lightning to attack the enemies with most health, and after the ram loses its health I sell them and build other towers, depending on their and the enemies’ position.
In the image presented, you can also see the exact spot in which I use the freeze spell (for maximum efficiency). When the ram reaches that point, I use my ability and that way, I can destroy it with ease. 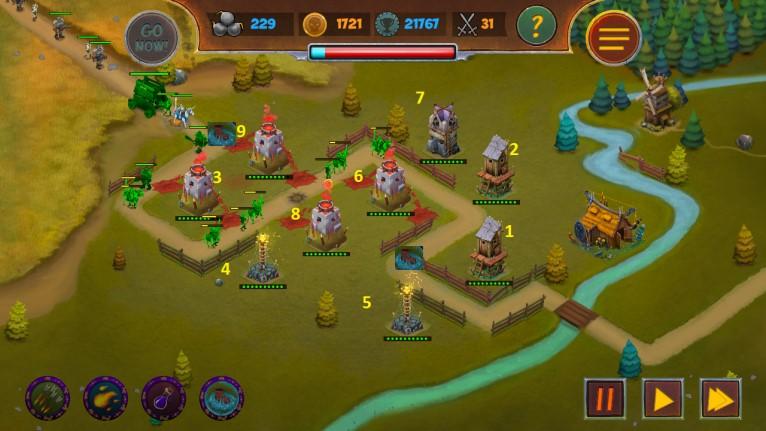 I hope that this article will help you see Hooman Invaders in a different light, that my advices will help you become better at the game and they will ambition you to reach a high score even better than my own. Good luck!