Love Factory is the first social game released in 2012, created and developed in Romania for Facebook players worldwide, in collaboration with Digital Cookies. The beneficiary of this project is Love Plus Romania.
The project was entirely designed in Romania for players worldwide, from concept to design, architecture and programming, with recognition to Love Plus and ASSIST Software.

The idea of the project was to find innovative ways to interact with the public, instead of aggressively promoting the brand.

Love Factory production and release were based on market research which showed that 47% of the urban population aged between 18 and 35 play on Facebook. Their favorite games are Farmville, Cityville, Mafia Wars, FIFA Manager and The Sims Social. Most popular games for both men and women are the Farmville type (91.2%), followed by poker (36.9%) and sports games (37.9%). Most men spend half an hour a day playing, and women between 15 and 30 minutes. The quantitative study was conducted in October 2011, on the basis of 400 respondents.

The game is a unique, presenting the story of a condom factory, where users can produce and, later sell condoms to different markets. The machines that produce condoms in the game are created by the design of the actual factories, while players are accompanied on their adventure by 5 characters and little robot MARU.

The game is based on a complex mechanism that allows users to buy latex, customize products and test them to make a profit to reinvest. Users can create their own online condom factory by starting from the ground up, literally. The actions that users can perform are: planning the game, building it, work in it and populate it with friends. Users can receive help from friends and even engage in virtual social causes and they can also convert their points earned in real products and receive condoms at home.

How we did it?

The development team chose for this project an architecture that provides consistency and flexibility. The game includes a game module and an admin module that facilitates adding new missions, enabling the possibility to extend the game play possibilities.

The project was developed in three phases. In alpha phase were developed all the functionalities of the game and the graphical elements. The graphic design team started from drawing board to create models for each object.

In beta phase all graphics elements were integrated and a mission game was developed in order to test all game functionalities. In the last phase was integrated the social part of the game by using Facebook API and then the final release of game was made.

The development team divided the system structure in 3 major modules: game module, administration module and API.  For the game development ActionScript was used due to the fact it is easy to learn and implement the basics, flash player is installed on 97% of all internet enabled computers, built in troubleshooting protocol within the Flash production Software, quick publishing when created, simply upload and play.

CakePhP framework was used to implement the admin module. By using CakePhP framework, we not only gained time, but also gain stability as the different components of the framework should be designed to work well together and have been thoroughly tested by the community. CakePHP allowed to setup the data model and connect it to a database to be easily manipulated in PHP. It also allowed separating the business logic from the display logic using a controller.

For the API we used amfPhp for its multiple advantages like: Client Code Generator for multiple client technologies, vast Community Support, tutorials, etc., in fact it is a Service Browser, there is no need to code gateway, making it easier to get started, various plugins are available also as well as support for other protocols.

3D Studio Max was used to transform images into game entities and then into game object by using Flash. 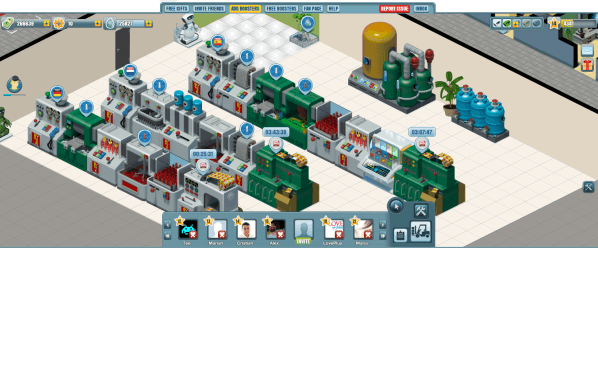