"If you do what you love, it is the best way to relax". Christian Louboutin

What are Lifecycle methods?

Lifecycle methods serve as a viewpoint into how our built components work behind the scenes. You often need to know when your component is created, added to the DOM, updated or destroyed. They provide you methods that enable you trigger different actions at different junctures of a component's lifecycle. They also auto-bind to your component so that you can use the component's state and methods. 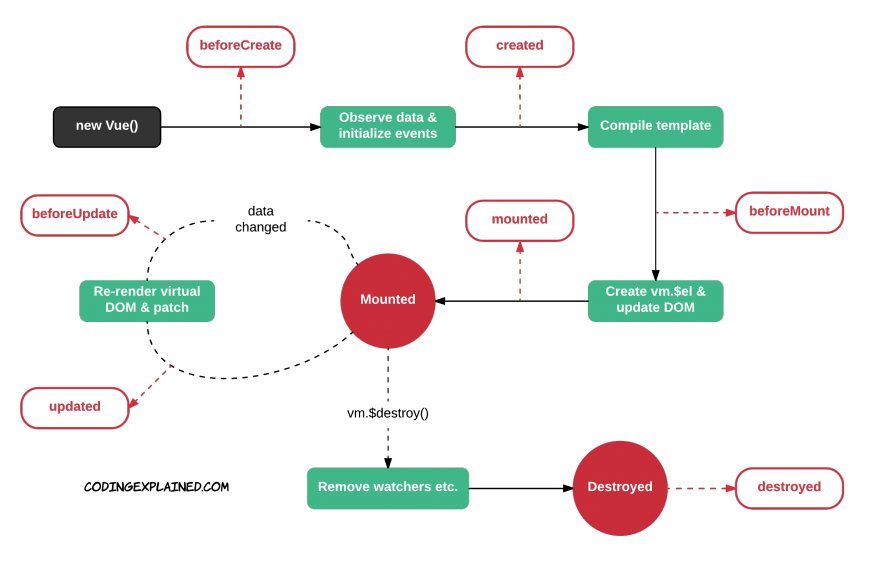 Actions of lifecycle methods can be broken down into four categories:

The beforeCreate hook runs at the very initialization of your component. Here, data is still not reactive and events that occur during the component's lifecycle have not been set up yet

created(): The created() hook is invoked when Vue has set up events and data observation. Here, events are active and access to reactive data is enabled though templates have not yet been mounted or rendered. Check out the code block below:

Do not use if: You need to fetch some data for your component on initialization. Use created (or created + activated for keep-alive components) for this instead, especially if you need that data during server-side rendering.

In the mounted() hook, you will have full access to the reactive component, templates, and rendered DOM (via. this.$el). Mounted is the most-often used lifecycle hook. The most frequently used patterns are fetching data for your component (use created for this instead,) and modifying the DOM, often to integrate non-Vue libraries.

beforeUpdate(): hook runs after data changes on your component and the update cycle begins, right before the DOM is patched and re-rendered. It allows you to get the new state of any reactive data on your component before it actually gets rendered.

updated(): The hook runs after data changes on your component and the DOM re-renders. If you need to access the DOM after a property change, here is probably the safest place to do it.

beforeDestroy(): is fired right before teardown. Your component will still be fully present and functional. If you need to cleanup events, beforeDestroy() is the best time to do that.

destroyed(): This hook is called after your component has been already destroyed, its directives have been unbound and its event listeners have been removed. The destroyed() can be used to do any last minute cleanup or informing a remote server that the component was destroyed. Check out the example below:

Other Lifecycle Hooks (activated and deactivated)

There are two other hooks, activated and deactivated. These are for keep-alive components, a topic that is outside the scope of this article. Suffice it to say that they allow you to detect when a component that is wrapped in a <keep-alive></keep-alive> tag is toggled on or off. You might use them to fetch data for your component or handle state changes, effectively behaving as created and beforeDestroy without the need to do a full component rebuild.

That's it. That's all Vue.js lifecycle methods are and nothing more. Now you should be able to visualize the journey of a Vue instance whenever it is initialized and as well customize your own code using these various hooks or methods should the need arise. You can look up also at A Beginner`s Intro to Vue.js 2.0 and documentation for other methods and properties to use alongside lifecycle methods when creating your components.