English Attack! is the world’s first 100% entertainment-focused online resource for helping people around the world improve their English language skills. It was created by media and entertainment executives who now work in English Language Teaching and see huge potential in a totally different approach to learning through online entertainment platforms.

English Attack! creates real innovation in English language learning by promoting discovery and learner autonomy instead of the traditional linear lesson based method; and focusing on "learning by doing." Our approach uses short-session online entertainment to encourage frequent digital immersion in real everyday English, with fresh content published daily. Join a worldwide community oflearners of English with whom you can make friends, start discussions, and use what you learn.

In 2010 - 2011, English Attack! has been a finalist or winner in a number of European and French technology start-up competitions, including PLUGG in Brussels, Tech Crunch Paris, Seedcamp Paris (we were voted among the top five start-ups) and The Next Web in Amsterdam. We have also made presentations on our pedagogical approach at a range of EFL / TEFL conferences, including TESOL France and TESOL Italy, BRAZ-Tesol, IATEFL Poland, and the IATEFL annual conference in Brighton, UK. In May 2010, English Attack! was accepted into the Paris Innovation Bourse cluster of innovative technology start-ups. English Attack! is a member of IATEFL, TESOL, and TESOL France.

There are two types of Learning Games on English Attack!:

Learners can also socialize their Practice Gaming by challenging a friend to beat their high score; and sharing news of a new high score with English Attack! friends or via Facebook.

The human brain retains new knowledge much better if it is paired with visual imagery; if it is contextual; and if subsequent repeat exposures to the new information can be provided so that the knowledge moves from short-term to long-term memory.

That, in a nutshell, is the pedagogical foundation for Photo Vocabs: themed visual mini-glossaries that provide a dose of useful vocabulary (interpreted as not just associated words, but also expressions, acronyms, cultural references and slang) across a variety of subjects. A Photo Vocab can be about almost anything: a sport, a hobby, a city, an industry… anything that can be illustrated with photos and which uses vocabulary specific to the topic. 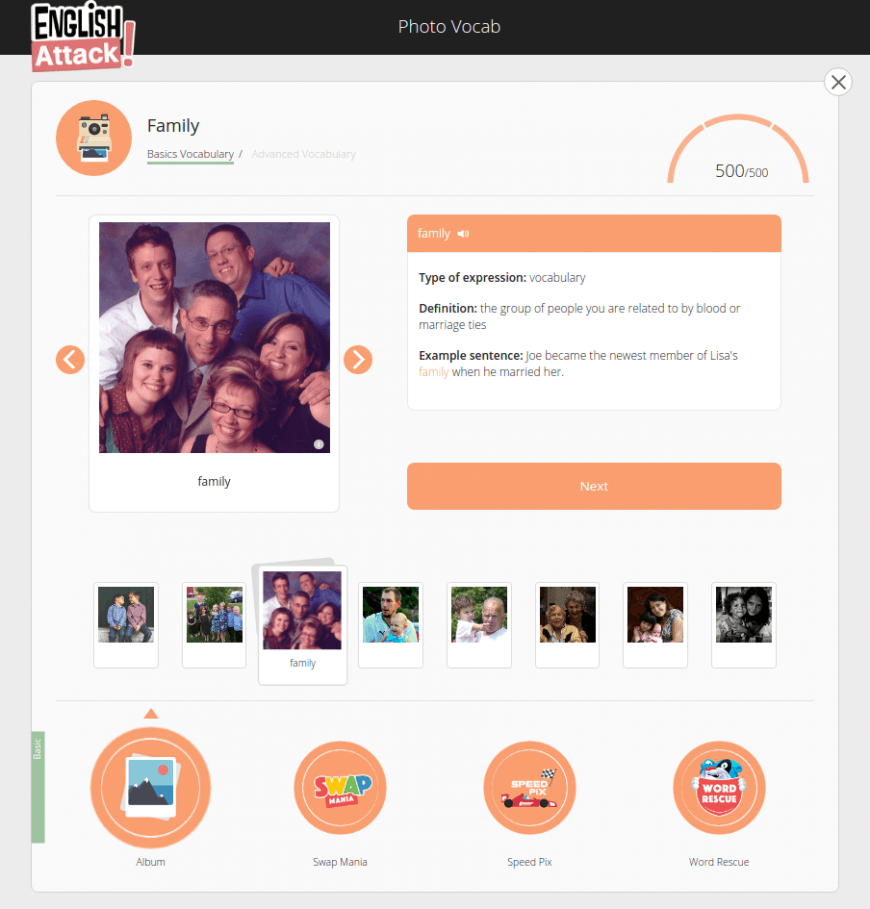 Each Photo Vocab item, beyond having its photographic illustration, is defined; used in a sample sentence; and has an audio file that can be listened to for the item's correct pronunciation.

Each Photo Vocab can then be "played" via a range of online games, allowing for ivaried repeat exposure to the vocabulary items, thus facilitating retention. Holders of a valid Booster Pass can, at any time, re-visit Photo Vocabs they have already seen and play a new series of games to refresh their recall of the items and of the subject as a whole.

Each is based on a short (one to three-minute) authentic-language video drawn from a wide range of current sources, such as blockbuster movies; hit TV series; chart-topping music videos; reports from global television news channels; documentaries; how-to videos; and lectures by opinion leaders. There then follows a sequence of five interactive exercises dedicated to comprehension, vocabulary use, listening skills, and grammar usage. 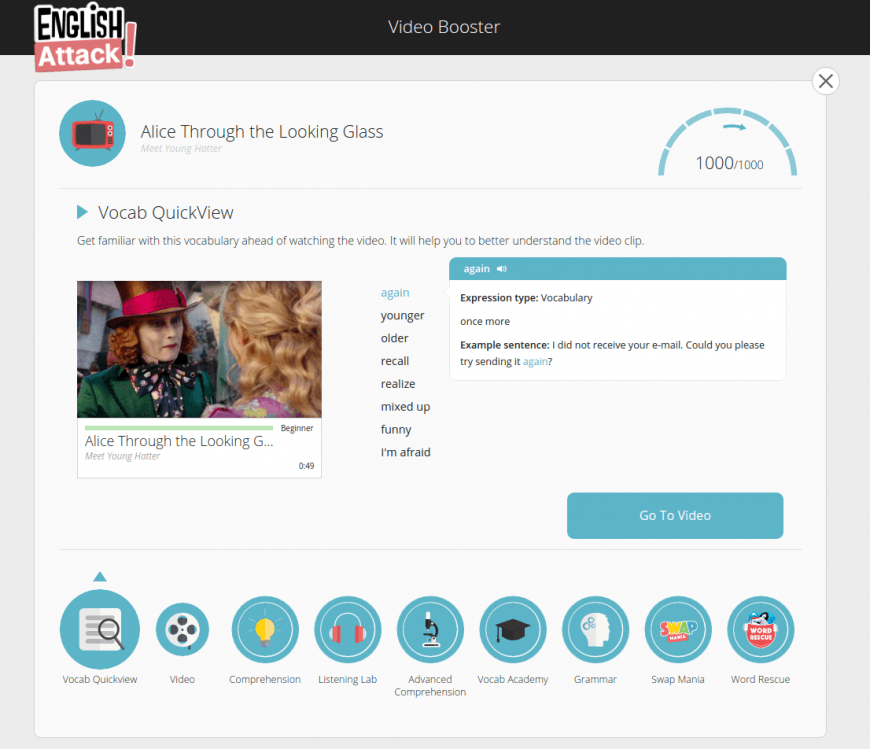 Each video is preceded by a snapshot of the vocabulary which will be encountered (from six to eight items) and a summary of the video. Learners can then view the video - pausing, rewinding, and replaying as often as they like - before starting the comprehension part of the exercise sequence. At each stage of a Video Booster, the learner continues to have access to the video resources (the video player itself; the key vocabuary; and, in later stages, the video transcript) and benefits from immediate feedback on correct/incorrect answers; intermediate scores; and messages of encouragement by the English Attack! mascot, Booster. 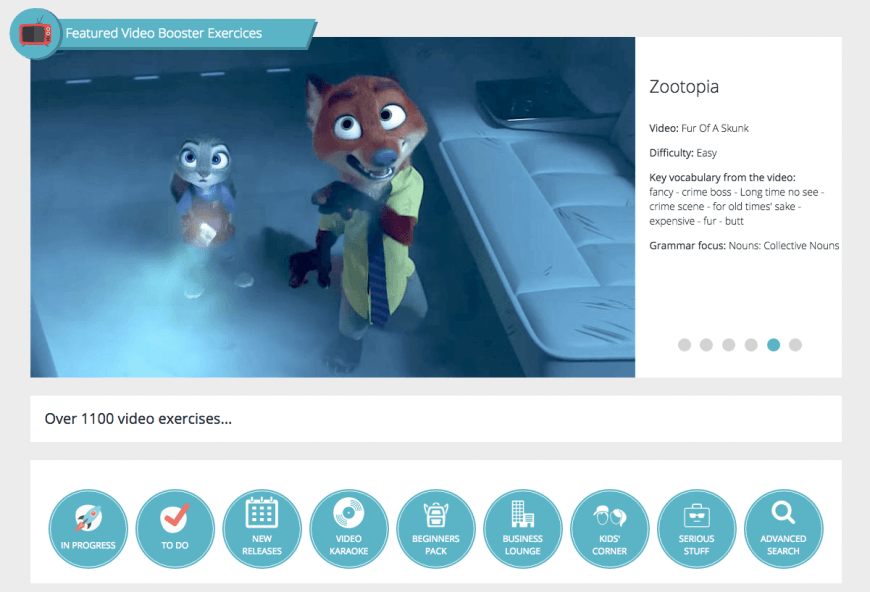 At the end of the Video Booster, you receive a breakdown of your intermediate and total scores; a skills graph; and suggestions as to related Video Boosters. You can also comment on the video; and share it via a range of social networking tools.

Evolve Your English: Points and Cards

The points you score on English Attack! allow you to move up the evolutionary ladder of English. The more often you visit, and the more you do on the site - for example, completing Video Boosters, exploring Photo Vocabs, playing Practice Games, posting comments and making friends - the more of an evolved "creature" you become. 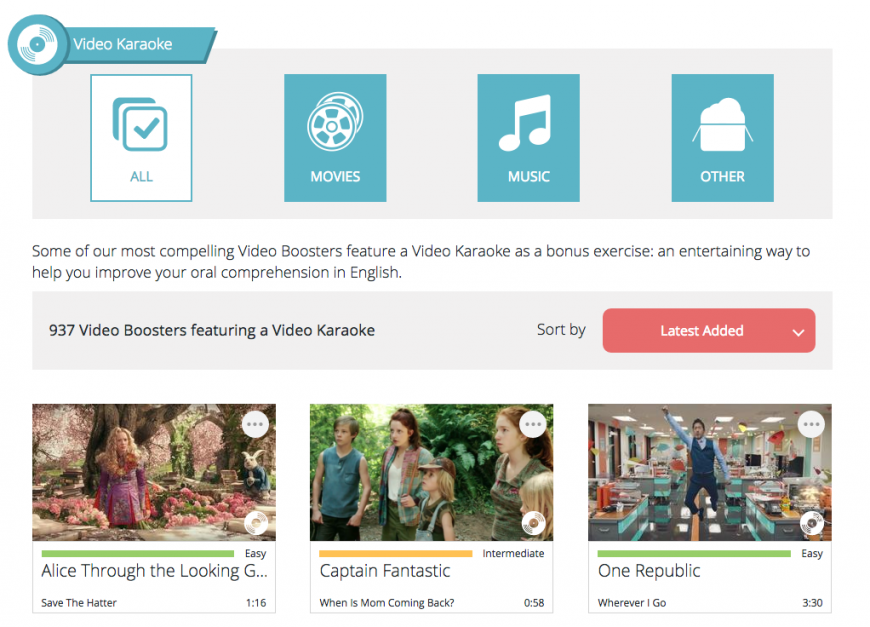 Each Creature level - starting off with Amoeba Silens when you first register on English Attack! - has five Evolution ("Evo") stages. Keep evolving, rising up through the species ladder, and one day your English will reach Alien level: simply out of this world!

Buzz of the Week

Have an opinion about this week's issue? Don't hesitate to voice it in English. The related Video Booster and Photo Vocab will give you some background and provide you with some language to talk about it. Above all, vote in the poll and post your comment. English is all about participating. Make your voice heard! 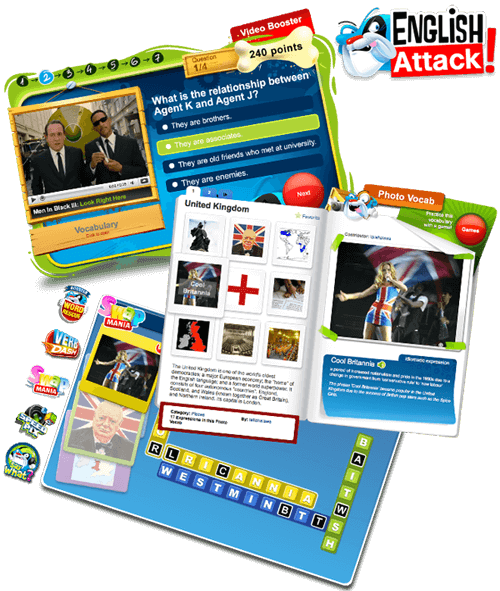